Promoting Climate Resilience through the Library

The grant comes with funding as well as film screening rights to support Alfred University Libraries as we design resources and programs that will create educational opportunities and public forums for community members to come together to learn, build connections, and grow toward a more sustainable and prepared future.

Alfred University Libraries are happy to present the new virtual Climate Resilience Information Hub. The virtual information hub includes movies, books, databases and articles, and open web resources. Due to COVID-19, not all materials in this hub are available to the broader community. If you need help accessing specific items, please contact Kevin Adams at adamska@alfred.edu.

Over the course of the 2021 Spring semester, Alfred University Libraries will host virtual film screenings for the broader Alfred community, which will be paired with programming to allow film viewers to come together and discuss topics like climate change and community preparedness. Details on film screenings and programming are forthcoming.

The Libraries are offering Information Literacy and Library Instruction sessions for all courses at Alfred University. We can provide anything from a basic library orientation to an advanced information literacy sessions.

We are happy to work with you to create a customized session that fits your learning objectives and the needs of your students. For more on the options available to you, check out this menu: Information Literacy Instruction Menu.

To request a library instruction session, please contact your liaison librarian or use this form: Information Literacy Instruction Registration Form.

Where Can I Study?

In an effort to support student learning while maintaining social distancing, numerous spaces around campus have been made available for studying or participating in classes online.

Herrick and Scholes Libraries both have study spaces and computers available. A limited number of reservable spaces are available for commuters or students taking courses online.
Email libraries@alfred.edu for more information.

Campus Computer Labs are available when not in use for scheduled classes. A list of spaces and hours can be found here.

There are additional spaces around campus such as Powell Campus Center, The Science Center, Miller and Seidlin. Some of these spaces are available for students studying specific subjects or require a reservation.
More details can be found here.

The Invertebrates Scale of Librarianship

Dannick encourages library professionals to establish their own personal  “policies” and “professional value system” by way of behavior analogies between librarians and jellyfish, nudibranch, and octopus. Dannick writes, “The Invertebrates Scale of Librarianship is intended to help librarians recognize and name their own professional tendencies… There will be times to be an Octopus, a Nudibranch, and a Jellyfish. Most of us will have a form that is more comfortable than the others. What’s appropriate is to recognize what that form is, how it helps and hinders, and whether a different form would be more suitable for a given situation.”   What’s a nudibranch? Learn more here.

The full article can be read here: The Invertebrates Scale of Librarianship

All requested library materials, including interlibrary loans, will be made available for pick up in Scholes Library.

Printers, scanners and computers are available to current AU students, staff, and faculty in Scholes Library. No appointment is needed.

Services such as Archives and research consultations will be available by appointment in Herrick and Scholes. Please contact directly, the staff or librarian you wish to meet with to make arrangements. Contact information can be found here: Herrick Library; Scholes Library.

The entrances will remain locked and instructions for entry upon arrival will be posted on the doors.

Both book drops will remain available for returns.

For more information on services or how to use the item requests system visit: https://libguides.alfred/COVID

Announcing Retirement of Mark A. Smith

For nearly three decades, Mark has been recognized, appreciated, and widely beloved across campus for his passionate advocacy for and devotion to the College of Ceramics, his boisterous laughter, and his dynamic and all-encompassing fervency in everything he does. After obtaining his Master of Library Science degree from the University at Buffalo, he has served the Alfred University Libraries, and Scholes Library in particular, in a variety of positions, including Reference Librarian, Information Systems Librarian & Head of Technical Services, Collection Management Librarian, and, most notably, Director of Scholes Library & Associate Dean of Libraries.

During his extensive career, he has shepherded Scholes Library with his characteristic nurturing style and roll-with-the-punches attitude, through all of the tremendous computing and technological shifts of the past few decades, including the implementation of numerous digital systems, tools, and resources. In addition, he led several strategic planning processes, directed multiple library space redesign initiatives, and helped to establish lasting cross-library partnerships while tirelessly championing the unique and specialized mission of Scholes Library. Mark served on myriad College and University committees including Middle States Steering Committees, Promotion and Tenure Committees, Search Committees, the College of Ceramics Faculty Council, Faculty Senate, and the Advisory Council on Technology.

Mark came to librarianship as a second career after a decade of teaching music and theater in Canisteo, NY. He has continued to share these gifts with the community though his leadership and involvement with The Orpheus Chorale, the Hornell Area Community Cantata Choir, the Hornell Community Theatre, and as a board member of the Arts Council of the Southern Finger Lakes, from which he received the Arts Partnership Award in 2013.

As a leader and mentor, Mark has consistently modeled how to lead with empathy, using the heart as well as the mind. Colleagues through the years could tell stories of times they brought Mark an idea and watched him immediately light up with excitement and enthusiastic support in direct proportion to their own excitement and enthusiasm. Mark has always been a master at nurturing the seed of an idea and ensuring it has ample opportunity to thrive. His approach to the cultivation of people has been similar, providing just the right mix of encouragement, direction, and space for each person to soar as their best self.

Throughout his career, Mark has drawn energy and inspiration from the relationships he created through his professional involvement in groups outside of Alfred. For instance, he has been the president and executive board member of the SUNY Librarians Association, the Chair of the SUNY Council of Library Directors, a member of the SUNY Provost’s Faculty Advisory Council on Teaching & Technology, a board member of the South Central Regional Library Council, and a contributor to the New Media Consortium’s highly influential Horizon Report. He received the SUNY Chancellor’s Award for Excellence in Librarianship in 2004 and the Friend of SUNY Librarians Association Award in 2012.

Mark’s colleagues throughout the years are grateful that he answered the call to forge a new vocational path into the world of librarianship. His second act has inspired, uplifted, and left us smiling a little bit more than before we heard and joined in his song.

Thank you for all of the laughter, support, and creativity you have given us, Mark. We wish you all good things in the next act of your life’s adventure. 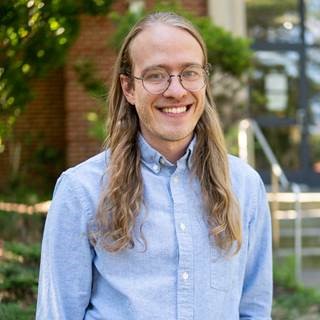 Alfred University Libraries is pleased to welcome the newest member of our team, Kevin Adams.  As the Information Literacy Librarian, Kevin is here to help students navigate the deluge of content available to researchers in the information age.  Whether you need  help starting a paper or research project, evaluating the quality of your search results or creating citations for a bibliography Kevin is here to help.
Kevin will also be reinvigorating our Library Liaison program which connects our AU Librarians to each of the University’s majors and minors in order to provide content specific research support, instruction and library collection development.  For more information about this program or to schedule an appointment with Kevin email: adamska@alfred.edu

What was your background before Alfred University?

Education: I studied History and Philosophy at Purdue University, then I got my MS in Library and Information Science and the University of Illinois in Urbana Champaign.
Work: I have mostly worked in restaurants and libraries. To name a few positions, I have worked as a delivery biker, delivery driver, server, kitchen prep, line cook, archivist, reference librarian, and a comic book cataloger.
What interests you about your current position?  I am excited to engage with the students and find creative ways to center them as we explore information literacy concepts!
Favorite social media platform?  Twitter!
What are you reading or listening to?  As I write this, I am listening to Charles Mingus. The book I most recently picked up is Black Skin, White Masks by Frantz Fanon.
What do you like to do to for fun?   I like to read, hike, fish (very amateurly), play video games, and cook.
What is something would you like to learn?   I would like to learn to play an instrument!
What has gotten you through quarantine and pandemic times? Hunkering down with my fiancée Sara Kramer and my two cats and dog.
Is there anything about you that others would be surprised to know?  I love punk music. Before quarantine I would frequently go to basement shows and start the occasional mosh pit.