Art From Books, As Books

On a Tuesday morning at the end of January, nearly 100 students congregated at the Scholes Library, meeting in front of the circulation desk but quickly spreading out into multiple lanes of busy traffic throughout the building.  Though they were not here to work on research papers or look up biographical information on artists, they were here to begin a project centered around the library and its collections.  Every area of the library was opened to them, with rare and unusual items from the archives and special collections on display–but for inspiration, not information. 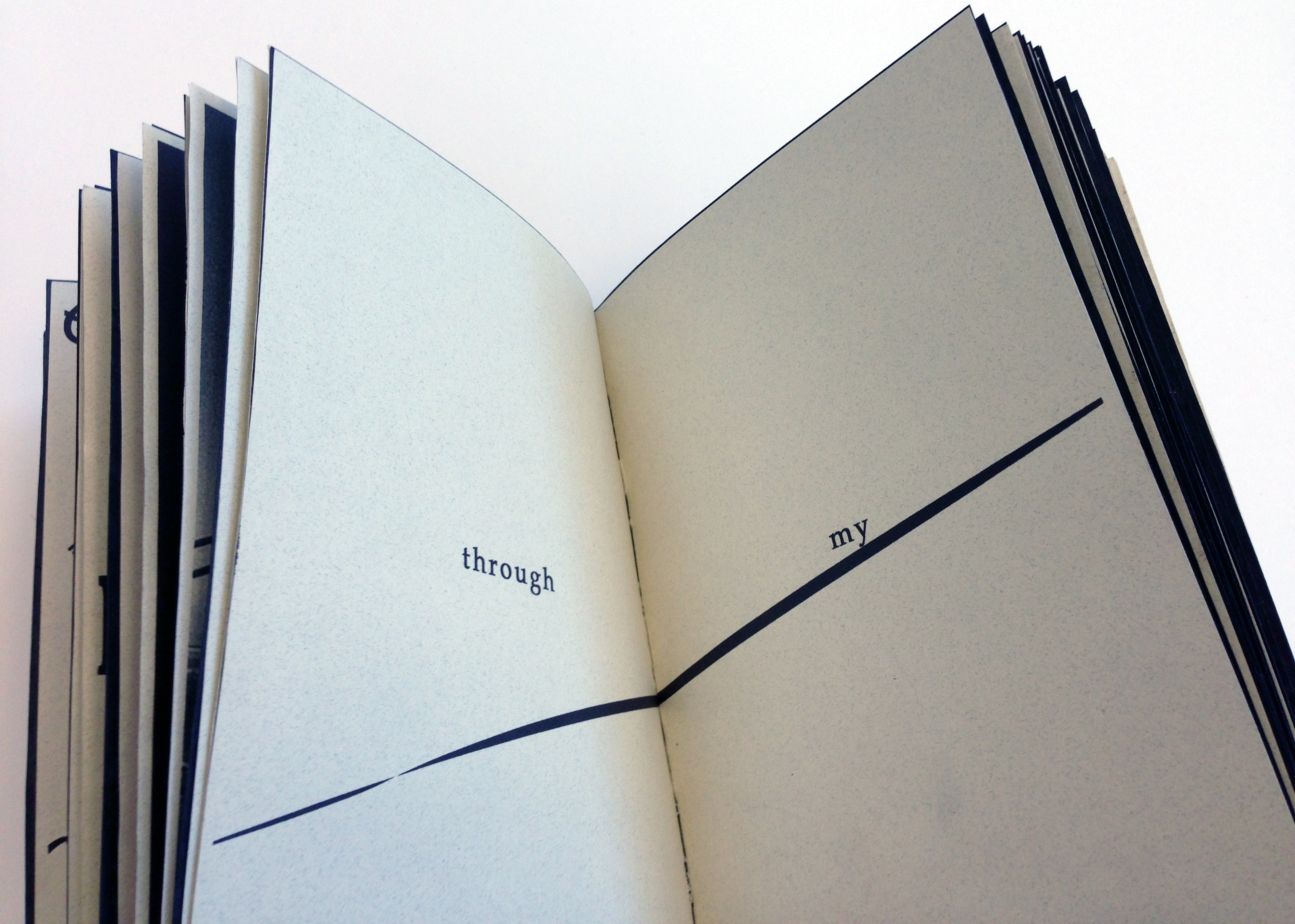 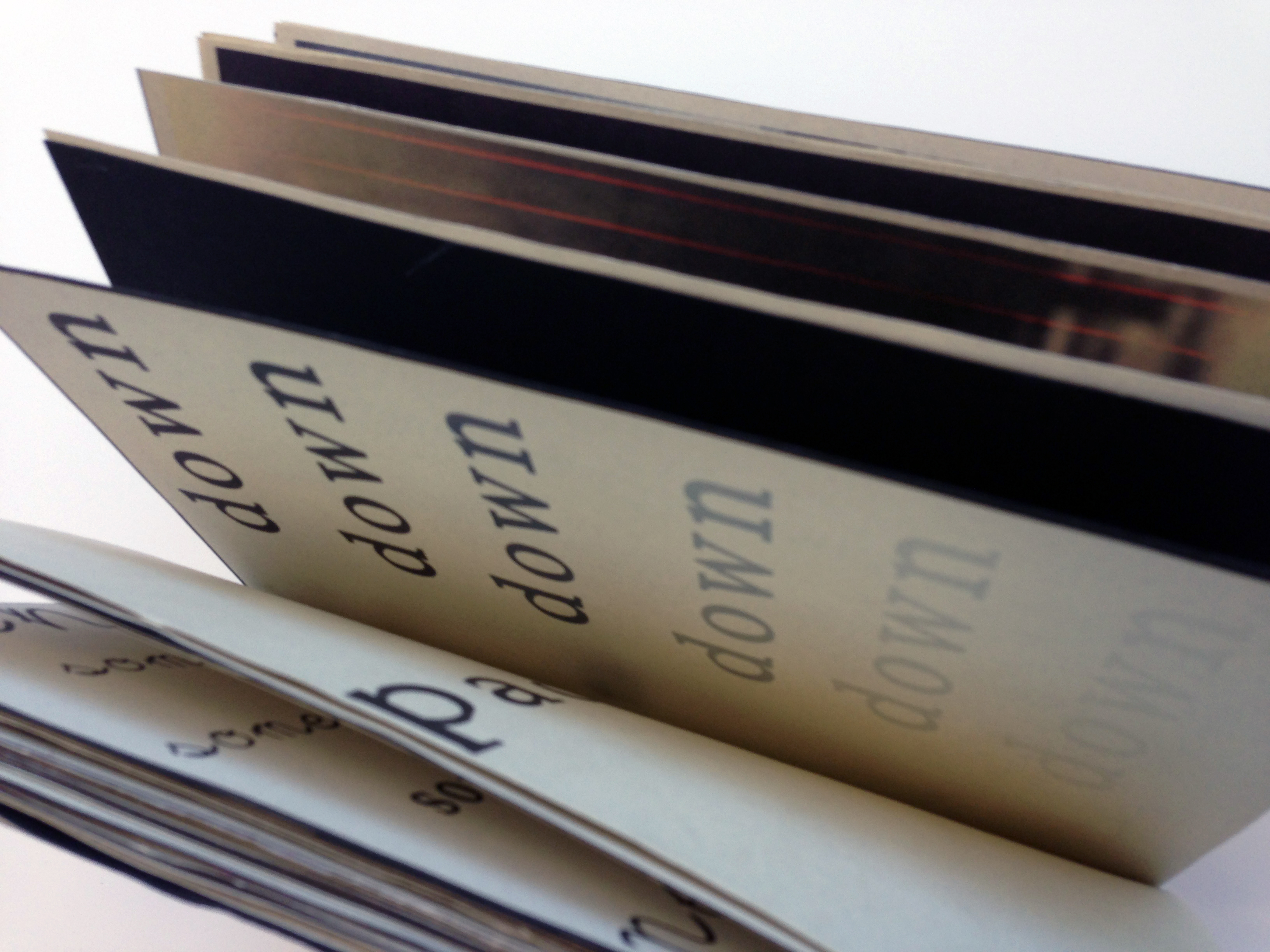 A glance at the typography of “One Hundred Steps”

The students were here as part of the Freshman Foundations program, a first-year experience for BFA students.  At the beginning of each term, Foundations students have a week to produce a work of art within parameters set by their professors, typically parameters about the format their work will take.  Unbeknownst to the students coming back from winter break, their professors had met with the librarians at Scholes during the fall term to put together a project that would bring students into the library and have them creating artwork inspired by and using library resources.  The assignment they settled on that fall was books; not just any books, but artists’ books–the perfect meeting of book and art. 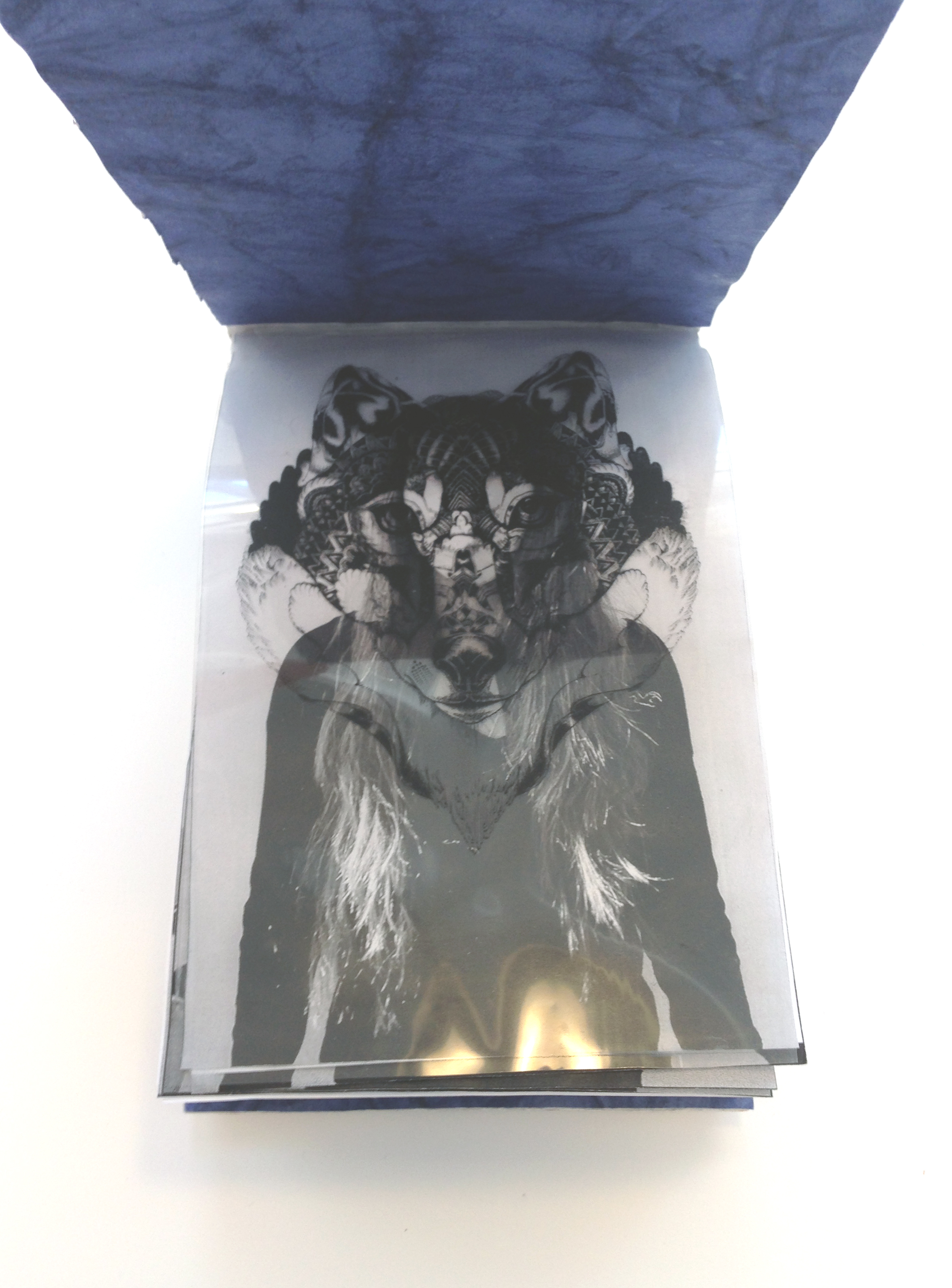 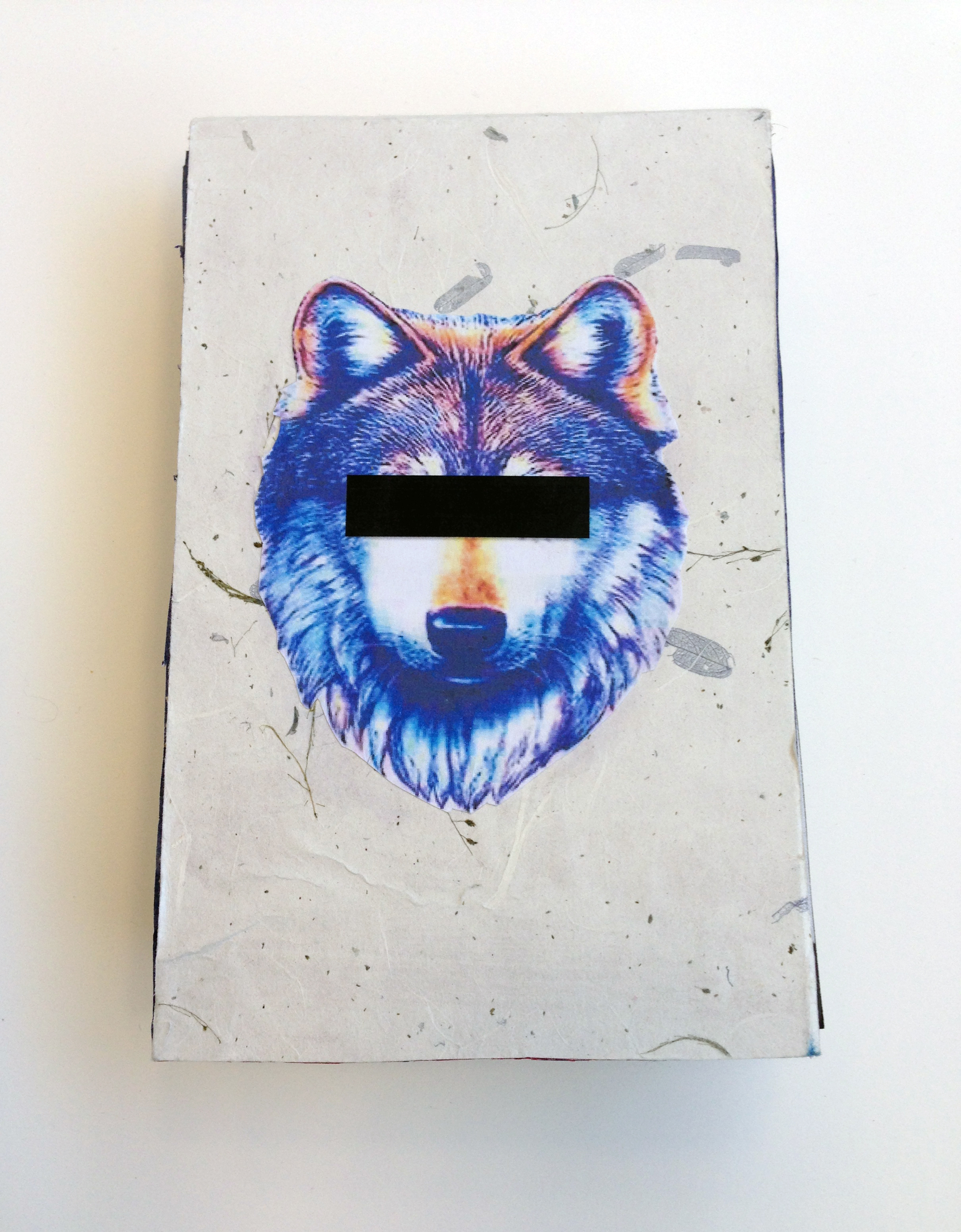 At the end of the week, we here at the library were invited to the Foundations classroom to see the finished books, and the results were truly impressive.  Using everything from books of patterns and decorative motifs to scans of magazines, encyclopedias, and survey texts, the students had created an array of artworks that ranged from traditional narrative books to the wildly experimental.
The forms, materials, and methods that students made use of were just as varied as the content. 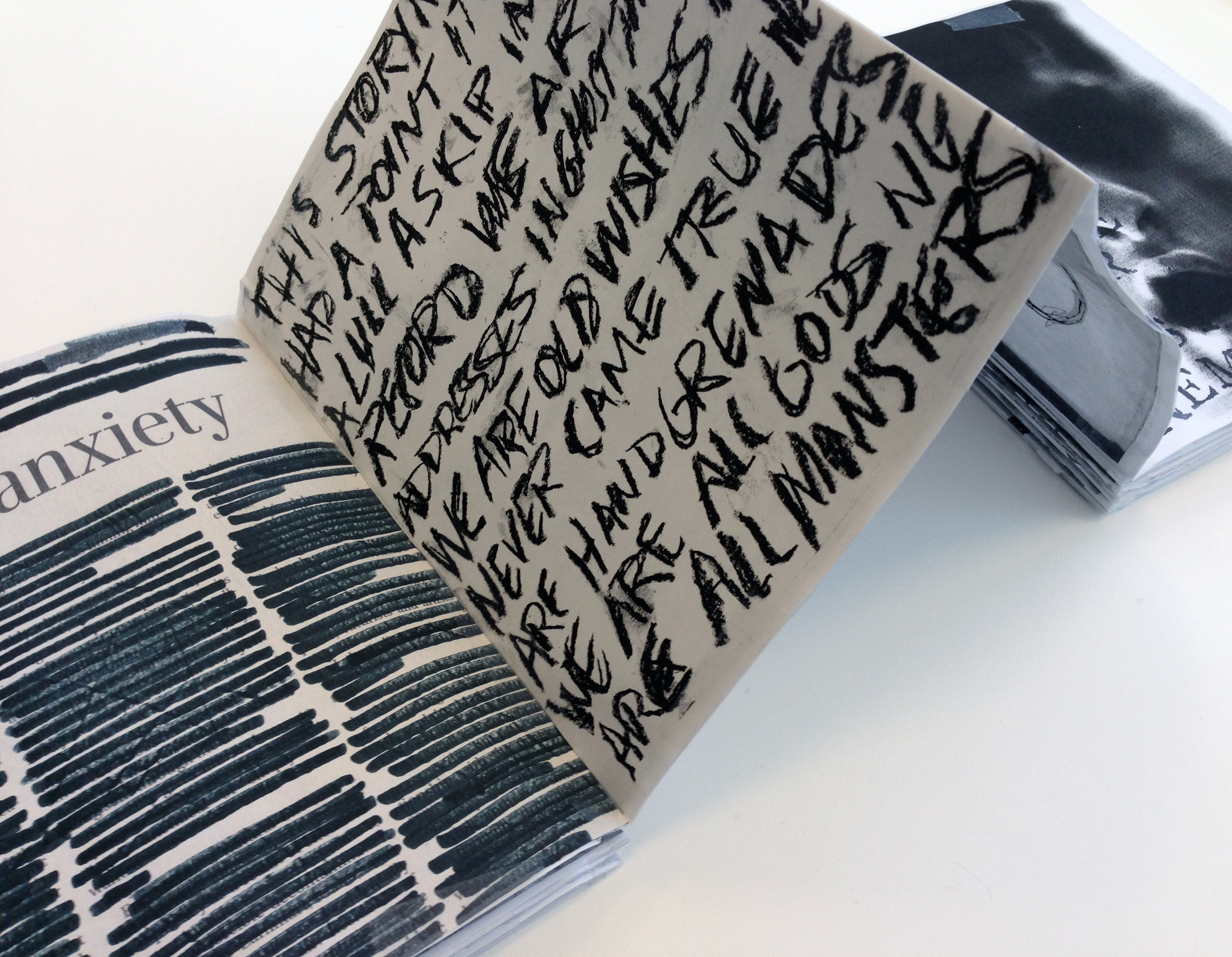 “The World is Bigger Than Me or You — and That’s Okay,” and accordion fold book by Mikaela Suders.

Scattered amongst the neatly side-bound volumes were creations that pushed the edges of what a book can look like, works that expanded in lengthy accordion folds or were cut to match the shape of their subject.  Some of the students’ works played with form in a way that affected the meaning or perception of the book as a whole, altering the movement from page to page.
Materials provided an even richer field of experimentation.  The majority of the works were made of paper, but others unfolded on sheets of fabric, plastic, or even glass.  Still others were made of traditional materials, but contained small samples of the unexpected–a sachet of lavender, an old map, a splash of glaze. 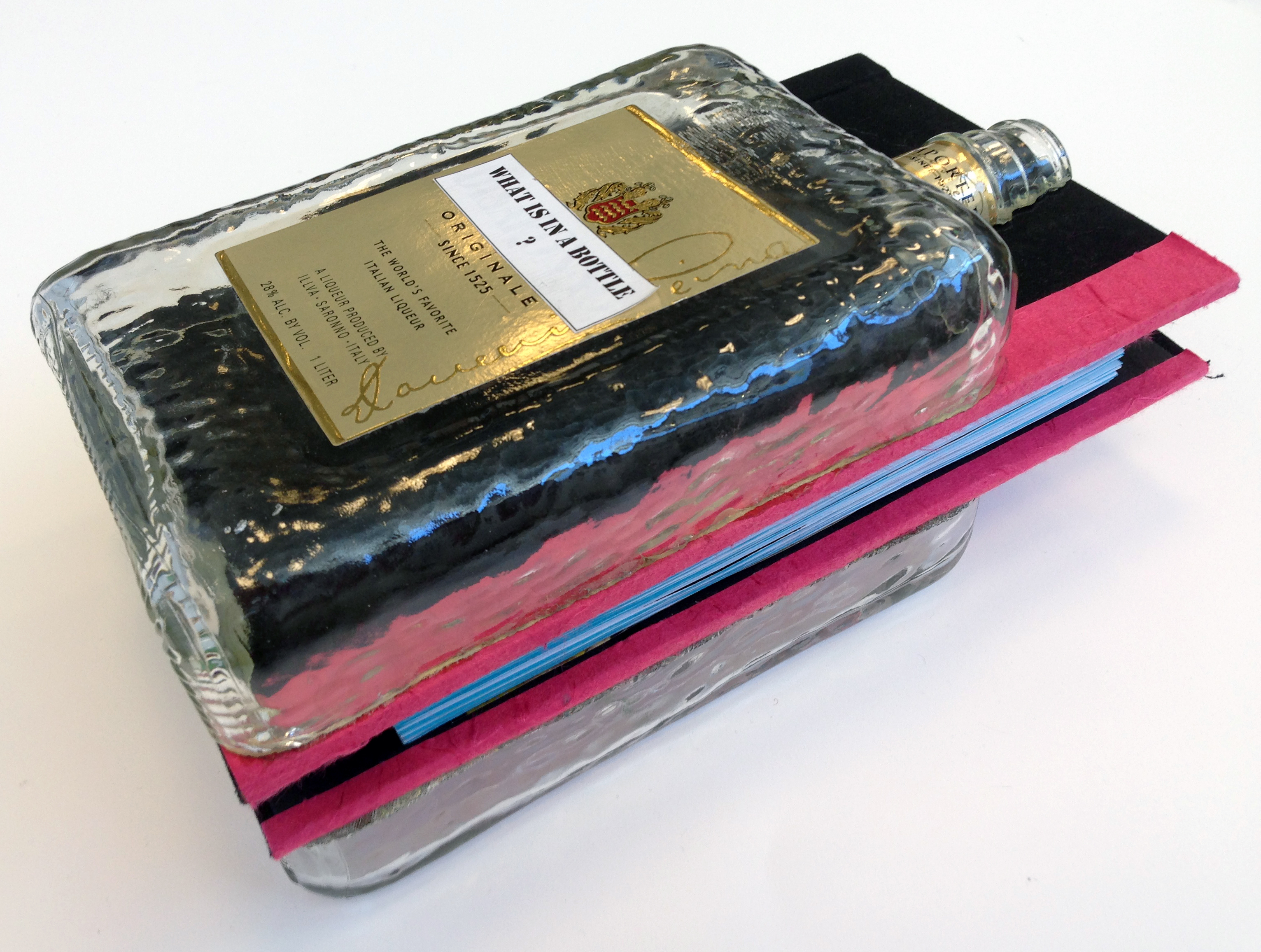 “What is in a Bottle,” Ruby Wisniewski

Perhaps most rewarding for the librarians involved in the project, some of the works showed signs of inspiration from the materials in the library that the students had been perusing just a few days before.  Works like A Humument, the modified Victorian novel mentioned in our first post on artists’ books, echoed in the selectively concealed and revealed words of books like “Alice,” pictured below. 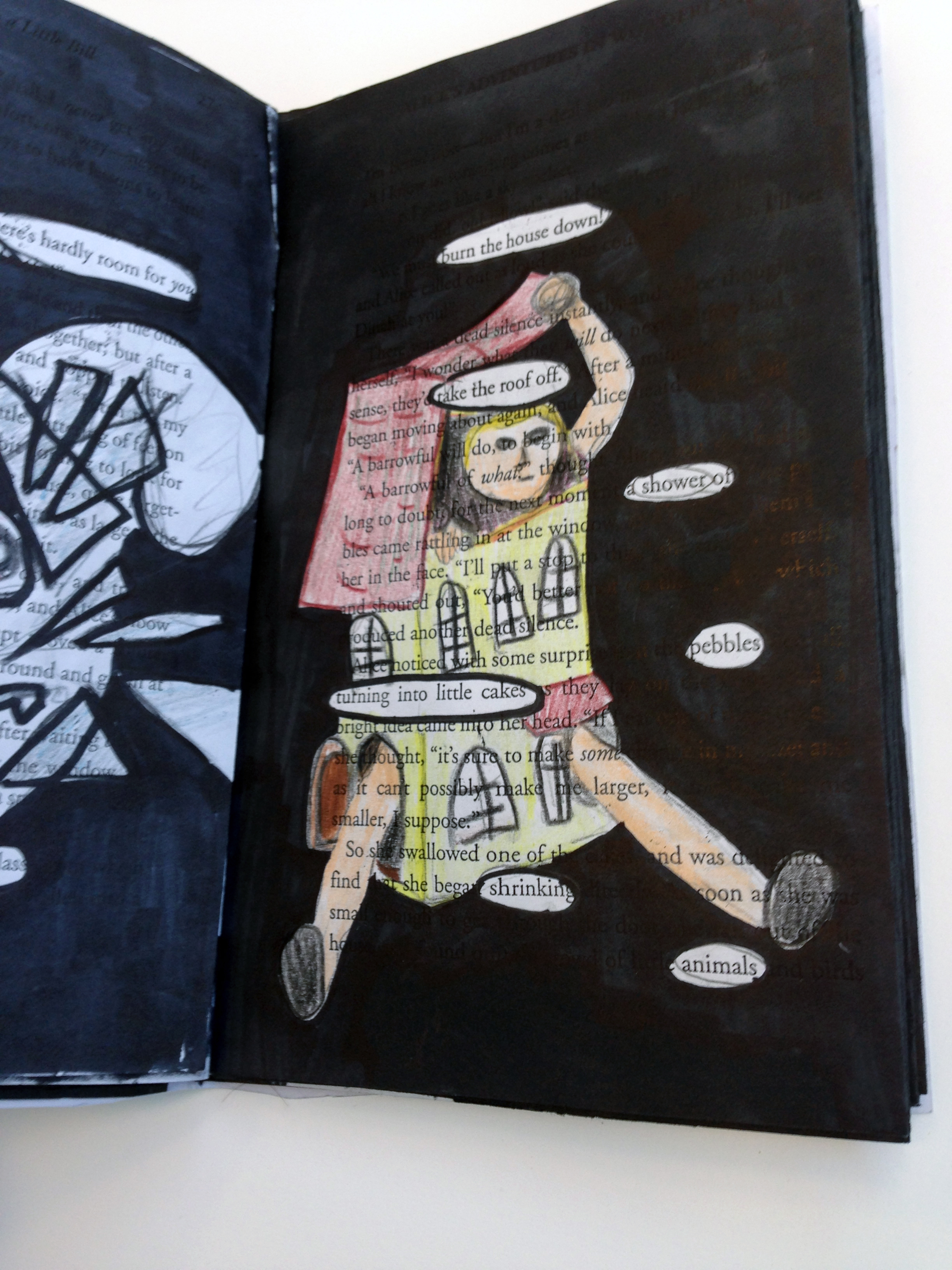 Even more exciting, soon the students’ art and the works that inspired them will be able to sit side by side.  Within the next few weeks, the students’ books will be delivered to the Scholes Library and housed in special collections alongside our other artists’ books.  Once the books have been delivered and cataloged for our collection, they will be on display to the public–and be sure we’ll make an announcement as soon as they’re available!